I’m very proud to finally put this project up here!
Black Cell Program is the result of a few years of creating and improving my song ideas. Starting out as my own solo project. it eventually grew out to become a fantastic band effort.

I tracked the drums at Flowriders studio in weesp, using the fantastic acoustics of the E-Sound drum room. Drums were recorded through an SSL4000 desk, several Telefunken V72 pre-amps and some Neve-clones. Among the microphones that were used are classics like Neumann u67, u87, u47FET, M49, Coles 4038 &  Sennheiser 421’s. These preamps, combined with the extensive vintage microphone collection of both E-Sound and Flowriders studio’s and the perfectly adjustable acoustics in the drum room are what laid the foundation of the record.

The kit used by luuk is a Sonor Beech Infinite special edition kit with different snares per song/song segment. For full details, check the list below. 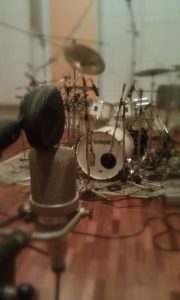 The remainder of the recordings and mixing were done in my own studio.

For guitars and bass I used the following gear:

These all went through my Axe-FX II XL

Vocals were recorded with a Sennheiser MD421 going through a CAPI-GEAR VP28 pre amp. Although we were able to use one of the many high end microphones from E-Sound, Michiel ended up being more comfortable singing in a handheld microphone, which made the performance way better!

Trumpet and Trombone is also performed and recorded by myself.
I used a combination of the Sennheiser MD421 and a RM-5 Ribbon microphone, depending on where it had to end up in the mix. they also went through the CAPI-GEAR VP28 pre-amp.

The guest solo on Moment Of Despair was performed and recorded by Jørgen Munkeby in Norway.
All songs written and produced by me, Lyrics by Michiel Meurs.
Mastering was done by Jens Bogren @ Fascination Street Studio’s in Sweden.