Before the start of this project, I was already involved with Dystopia as their live FOH engineer. When they asked if I wanted to help out with the recordings and mixing of their new full length album, I just had to say yes of course!

The drums for Chaos Philosophorum were recorded on a really cool location, Fort Westoever. A brick fort built by Napoleon. We put the drumkit in the officers’ mess, because with its oak wooden floor and some furniture, it had the best acoustics. The door to the hallway had to be left open for the multichord to go through, allowing the sound of the drums to go through the whole fort hallway, creating a reverb of around 4-5 seconds. Of course I had to put some mics (pictured below) in here to capture this real reverb! In the mix, this was the reverb I used most to retain the atmosphere of recording in an old fort. 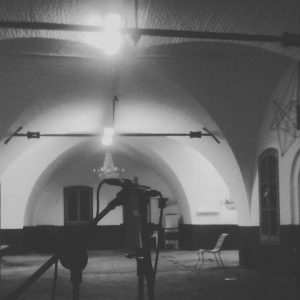 After the drums, the guys recorded the guitars, bass and vocals in their own (WWII) bunker and also re-amped a bunch of stuff later on.

At the time that I started mixing in my studio, they asked if I could add two small pieces with trumpets/trombones and so I did. It turned out they were quite overwhelmed by what it added to the mix. Although they wanted more brass, they were a bit hesitant at first, because “how are we going to do this live?”.
That’s kinda how I ended up being their 3rd guitar/trumpet/trombone player.